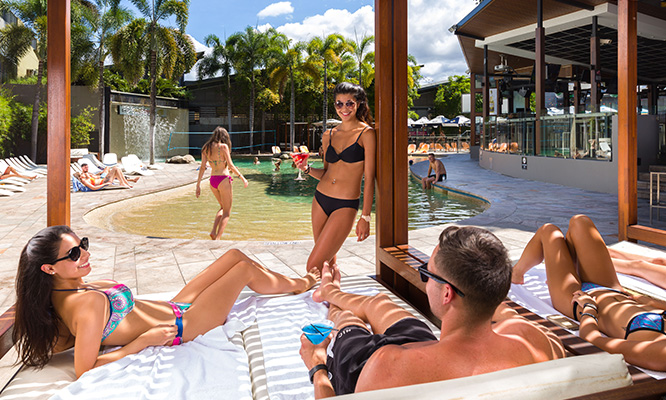 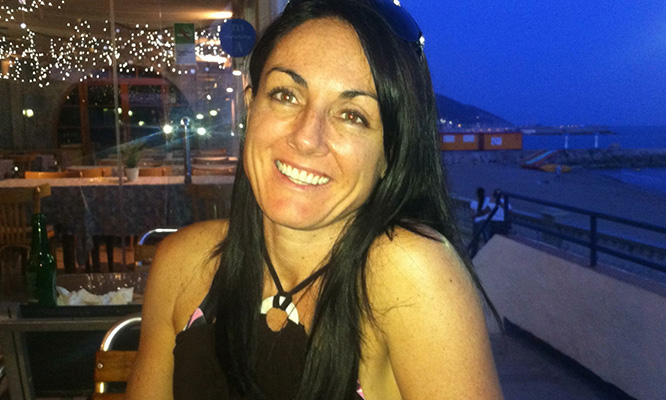 What’s the name of your accommodation, where are you located and how long have you been open for?

Gilligan's Backpackers Hotel and Resort up in Cairns right in the city centre 57-89 Grafton street. This year is our 15th birthday!

Cool! What sets you apart from other accommodation in the area?

Gilligan's was purpose built 15 years ago, when the originators built Gilligan's, it was with youth adventure travel in mind. So Gilligan’s has a lot of unique features, for instance we have an en-suite in every single room, which a very unusual thing for a backpacker's resort to have.

It's a large establishment but we have an accommodation section on one side and then we have an entertainment sector on the other side. We're right next door to Rusty's Market so anyone staying with us can get fresh produce and they can cook in any one of our four state-of-the-art kitchens.

We also have a restaurant and we serve meals from $5. All these facilities in house make us extremely unique. We have so many people comment about it while they’re here and when they leave. You don't even really need to go anywhere else, because it's all in house.

Seriously, there's so much. There's a massive swimming pool, a job club so we help people with their 2 year visa and general job assistance and heaps more.

Originally it cost 34 million dollars to build and in the time that I've been working with the company they've spent well over six million dollars on further refurbishments, because we're not only a backpackers but we're also a hotel with really beautiful hotel rooms.

How do you get to or from the bus station or the airport to the hostel?

From 8:00 a.m. to 8:00 p.m we have a free airport pickup and outside of those hours an Uber or a cab won’t set you back much as the airport is close. It's about a five to ten minute walk to the  bus station too.

What types of rooms do you have available at the accommodation and how long do people usually stay?

General length of stay with us is usually around five nights, however most people extend because Gilligan's is a super unique property. We have all dormitory style rooms and they range from ten share to eight share, four share, six share and then we have twins, triples and kings that are all hotel style rooms. The best part is that every single room has an en-suite and is air-conditioned.

Seriously, there's so much. There's a massive swimming pool, a job club so we help people with their 2 year visa and general job assistance and heaps more.

Do you have a time of year, a high or low season or any events that travellers should be aware of?

We don't as an individual operator. I wouldn't say that we have a high or a low season because we suit so many different demographics at Gilligan's having en-suites in every room, having hotel rooms as well. We constantly have events so obviously we just had New Year, which is huge at Gilligan's. This month it's very much about Australia Day and we'll have a three day party with pool parties and DJ's and nightly events. In February we've got our Ultra Glow Toga Party, which will just be incredible. We've got international DJ Nitti Gritty from the USA on the 3rd of February up in the Attic. In June next year we've got Sinner's Ball on the Saturday night. I don't know if you've ever been to that but it's pretty raunchy. And then we've also got the Man Hunt National Finals on at Gilligan's this year. We have so many events on and of course, we've got our 15th birthday, which is later in the year in mid-November which will be massive. That party will be around the 17th or 24th of November. There's always awesome things going on in our club with seven nights a week entertainment.

What are the main facilities that you have for guests?

We have a massive swimming pool, it's absolutely beautiful. We've got four state-of-the-art kitchens. We have the Attic Nightclub and then we have the Gilligan's entertainment venue downstairs. We've got a restaurant, deck bar, beer hall, a job club called Workers Wanted. We're right next door to Rusty's Market. We're surrounded by cafes and shops, so if anyone will need breakfast or wants to grab a coffee, we're literally right there. It's the perfect stepping off point for all travellers.

What time are the kitchens open until?

The kitchens are open all the time, the same as reception.

Where is the closest supermarket?

Through the arcade across the road, it’s maybe a three minute walk over to Woolworths. Anything you need like the bank or Medicare is very close.

When checking in, what should guests have ready? Do you offer luggage storage? Do you offer early check ins or late check outs, all that sort of stuff?

When our guests are checking in, we do ask that they have their identification ready, so their driver's license or their passport, plus we also take a key deposit, which is refunded when they check out; just for those little plastic keys.

We don't offer early check in or late check out, generally it's check in from two o'clock onwards. And check out is by 10:00 a.m. in the morning. We offer luggage storage for when people are coming to stay or when they're checking out.

Do you offer any free stuff or activities for guests?

From February 2018 we are starting to offer free WIFI to guests which is great for web browsing & social media, we’ll also have a premium WIFI option which is only $2 a day. Every night in the bar, there is something going on. One night might be movie night, the next night might be something a bit more risqué like jelly wrestling, The next night might be wildlife. We're actually just changing those events up at the moment, but there's always free activities because we want to encourage people to meet each other.

What do guests find most surprising about Gilligan's?

How amazing the entire property is and the incredible value for money because you can stay at Gilligan's generally from around $25 a night. We also sometimes have specials on where it’s stay 5 nights and only pay for 4. So, it's incredible value for money. The newly refurbished hotel rooms are a constant surprise to our hotel guests because people come in not expecting much from a Backpackers resort and don't necessarily think of us as a hotel. Our hotel rooms are beautiful. They're really modern.

Of course the all-time favourite is the en-suite in every single room, because that's just unheard of in backpackers. You're always running down the hallway with your thongs and towel and then you're lucky, no one's stolen your clothes when you're in the shower.

What measures do you have in place in regard to the safety of guests and their belongings?

We have 24 hour reception and 24 hour security plus we have lockers in the rooms for electronic devices and phones. There’s a locker for everyone and it keeps your iPad, phone, wallet, passport all safe.

What would you say is the most popular tour or activity in your destination in Cairns?

Ha-ha Yeah, I definitely could.

The Great Barrier Reef of course.

Are there plenty of power points in the rooms?

We've put extra power points into all the rooms so there's plenty of spaces for charging phones and in reception we actually have a charging station as well.

Is there a favourite late-night eatery around Gilligan's? A favourite local haunt?

We have a hole in the wall style Pizzeria which is open very late.

People don't even have to leave to get a late-night snack?

Nope you can just get it from the pizza place and in the mornings there's heaps of cafes for breakfast on the corner there's Pancake House, which is one of my favourites and if you go around the other corner from there you’ll find Waffle On.

Do you have a funny hostel story you can share with us?

I have so many of them! But, I don't think that I can actually share one because I'll incriminate myself and a lot of other lovely travellers.

So basically, come to Gilligan's expecting to come out with lots of fun stories?

Is there anything that you think we've missed that you'd like to say to people coming to Gilligan's?

Look, it's a destination in itself. You've only got to look on TripAdvisor or speak to fellow travellers, it’s an awesome place to meet people and even if you're not looking to do that much in the area, it's a fantastic place to just come and chill out or to party. 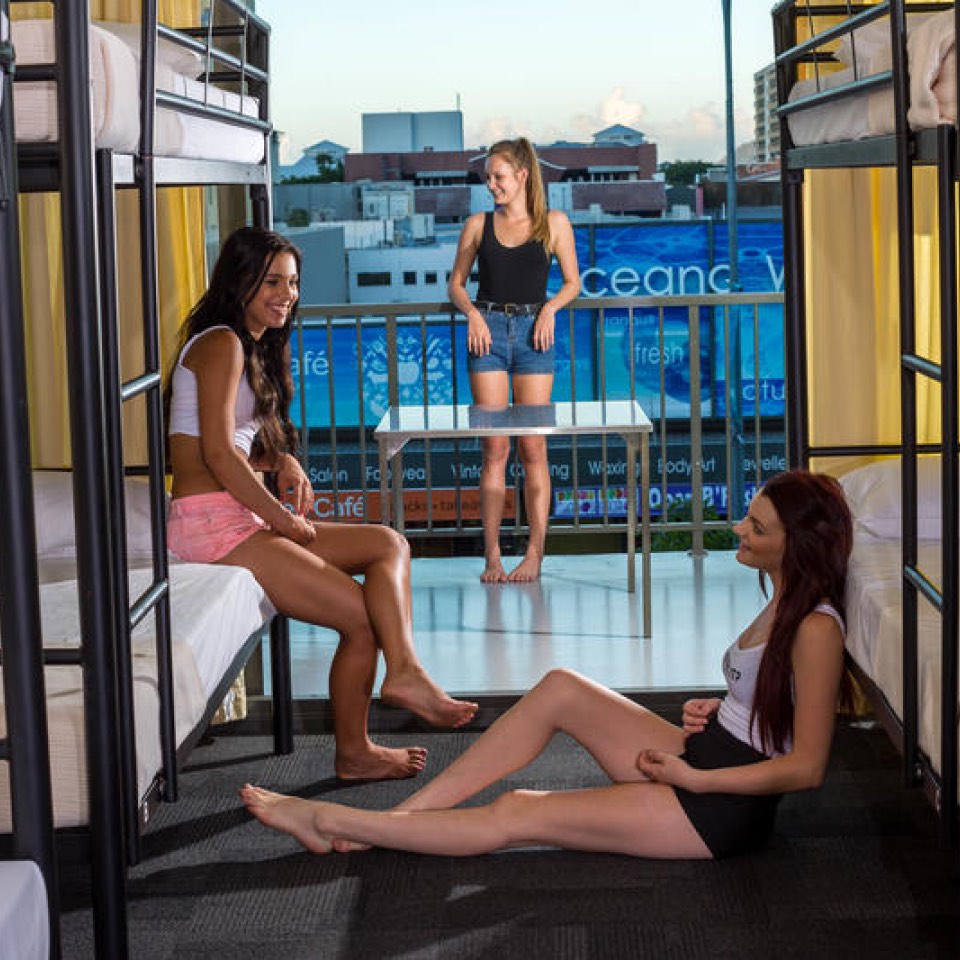 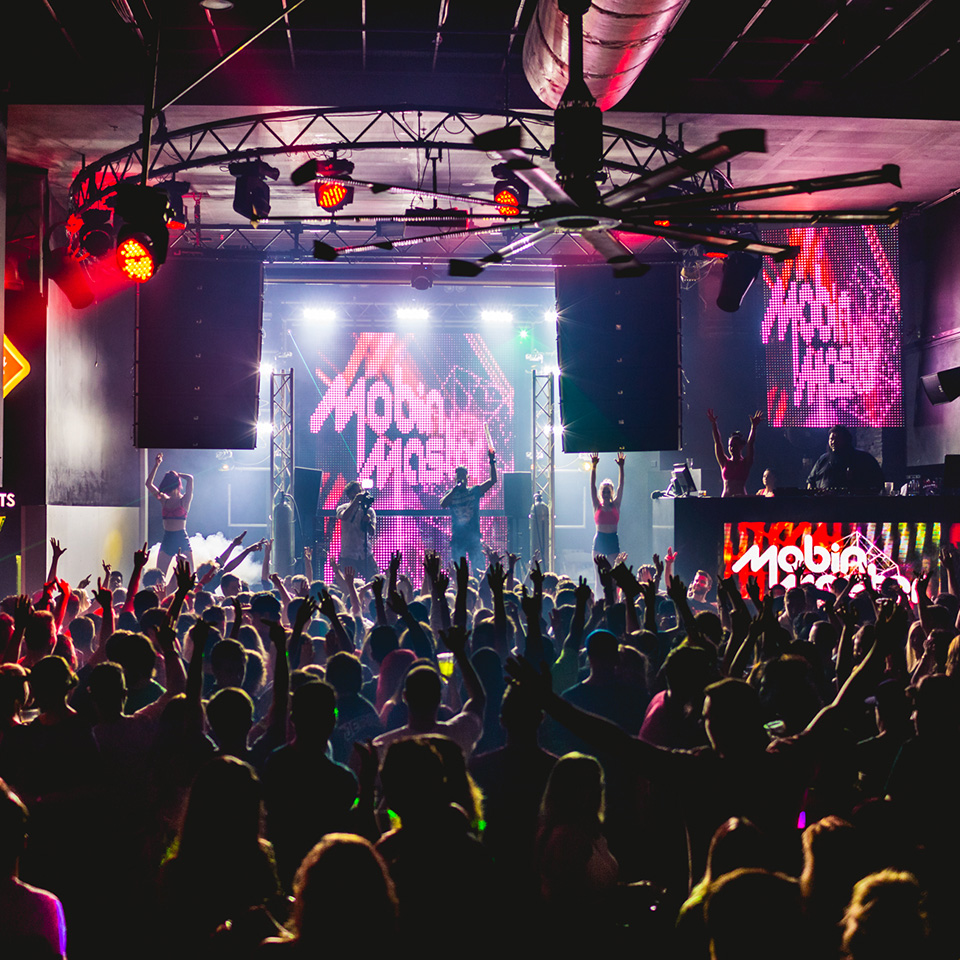 Awesome nights out at Gilligans 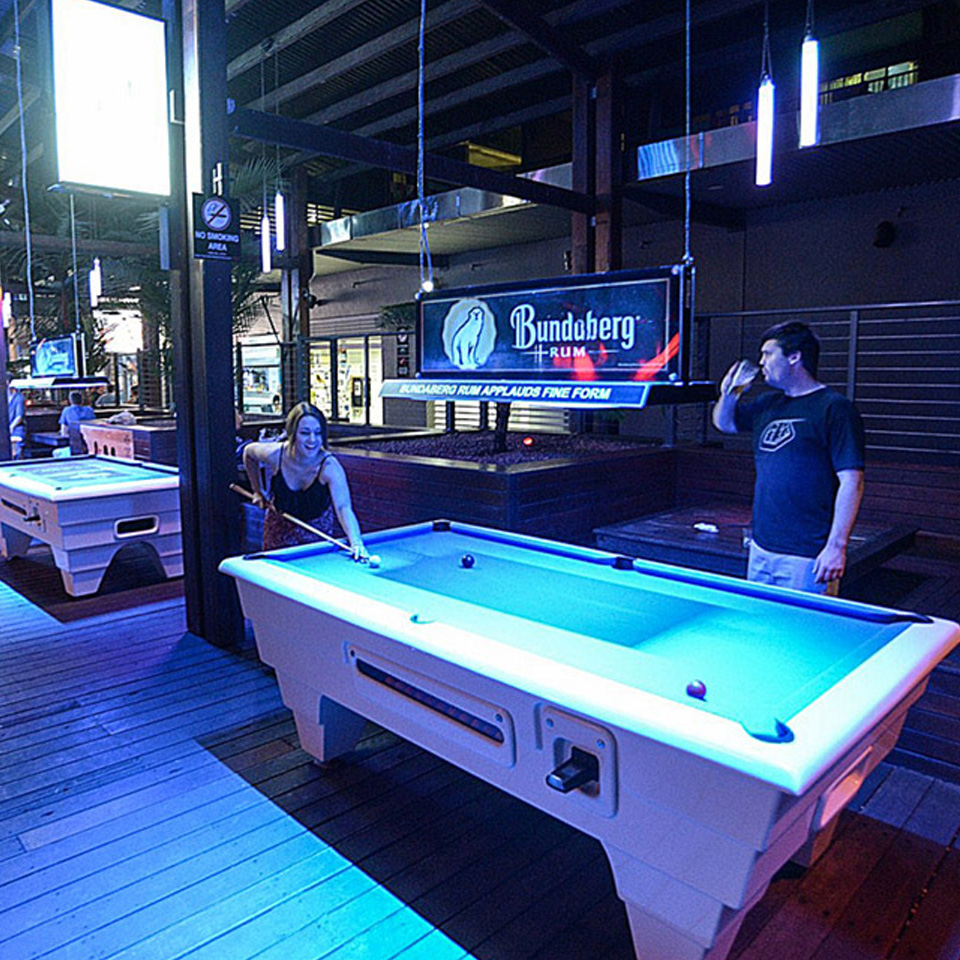 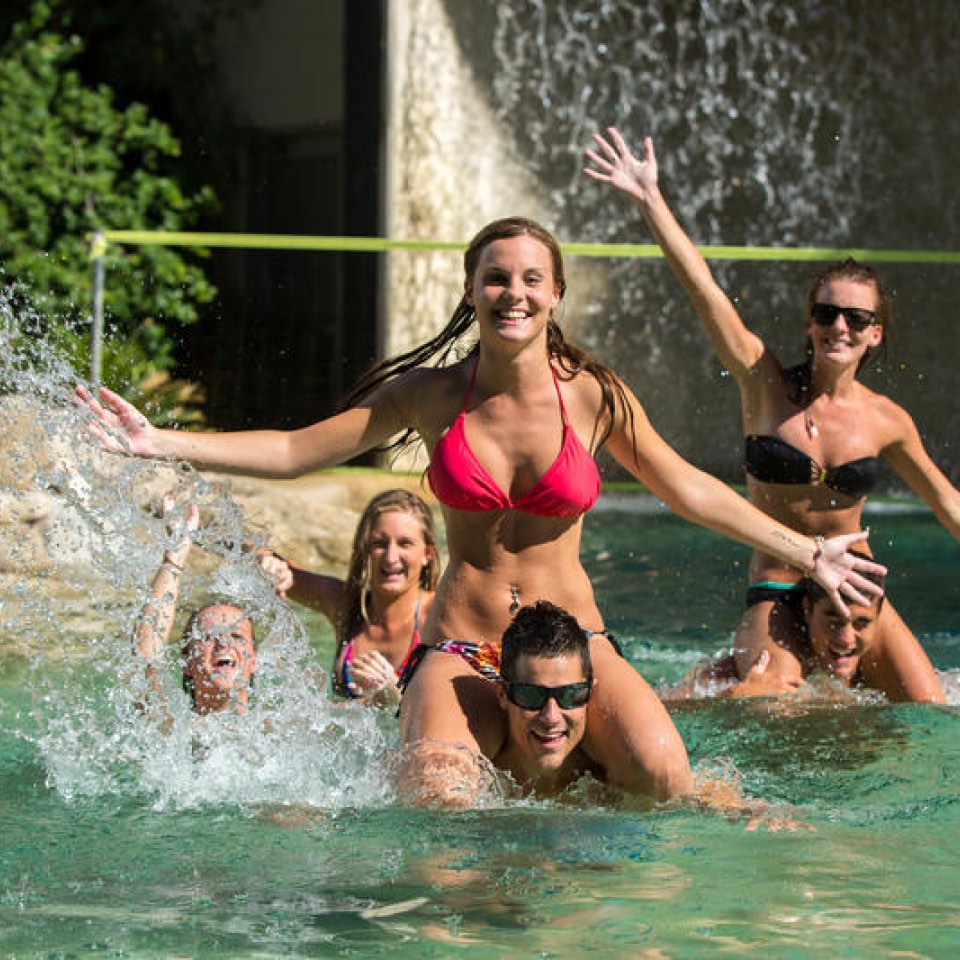 Fun in the Sun 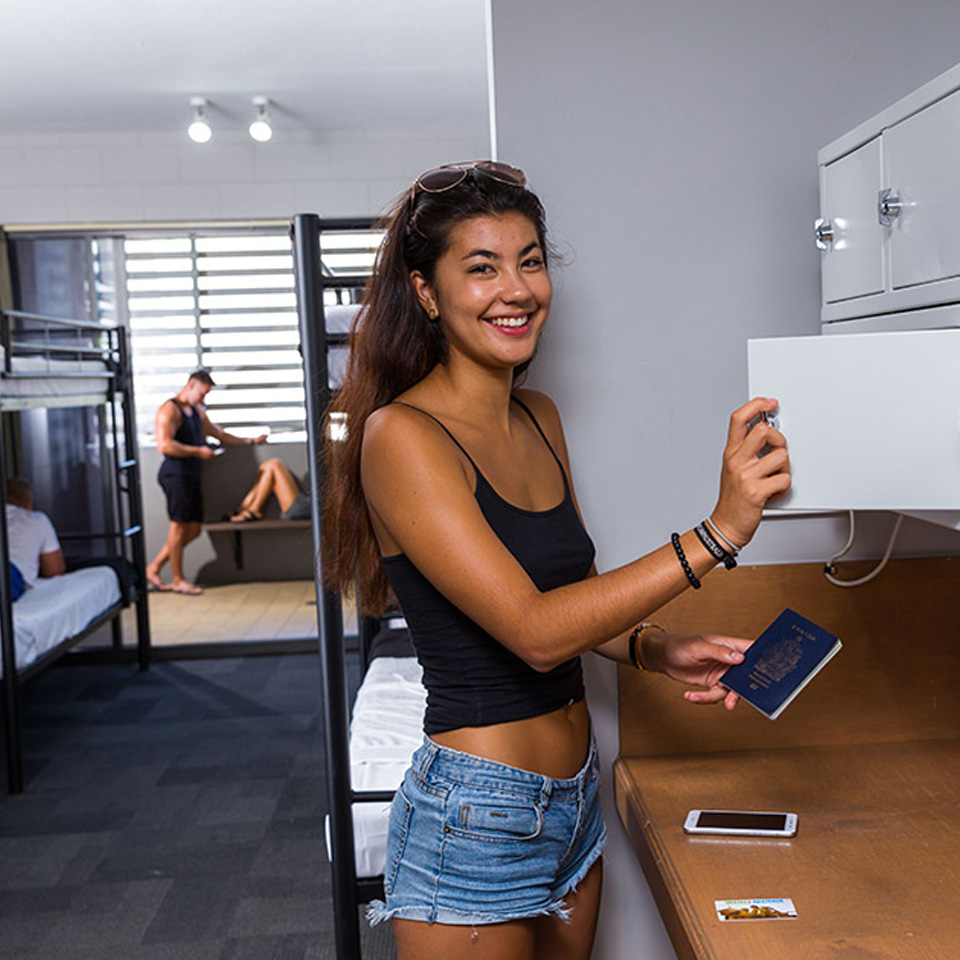 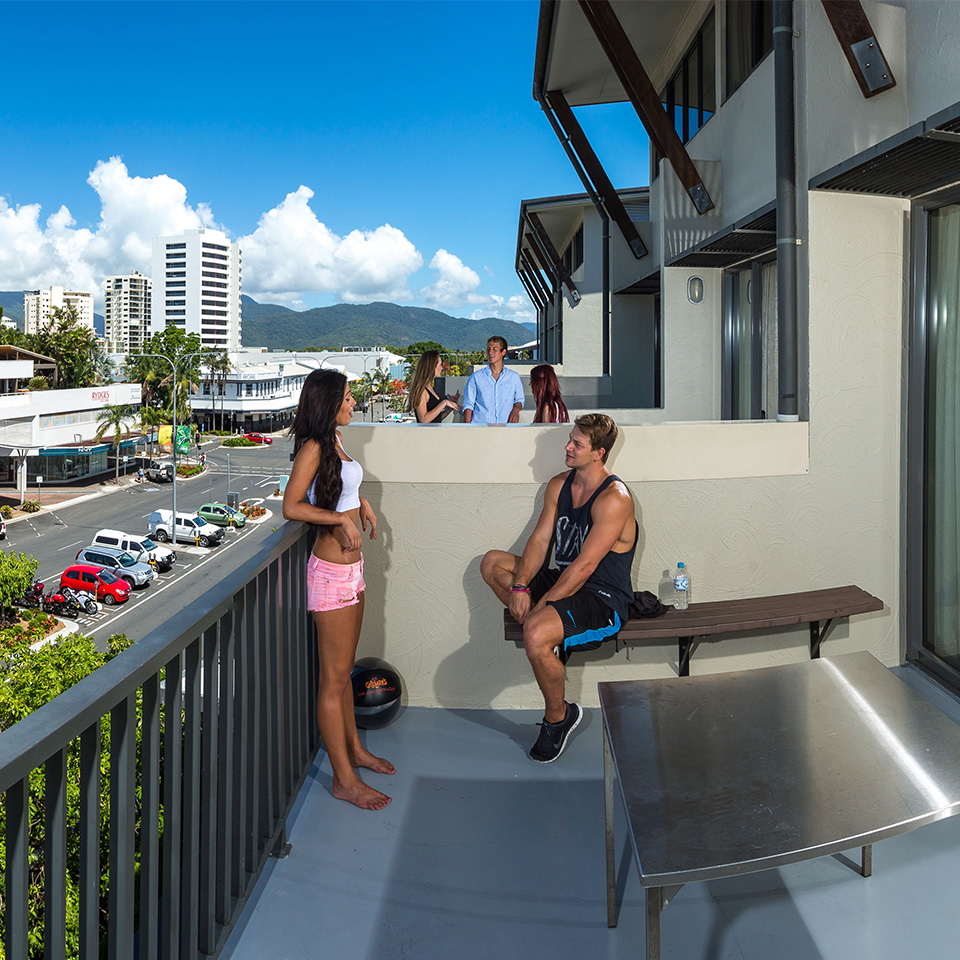 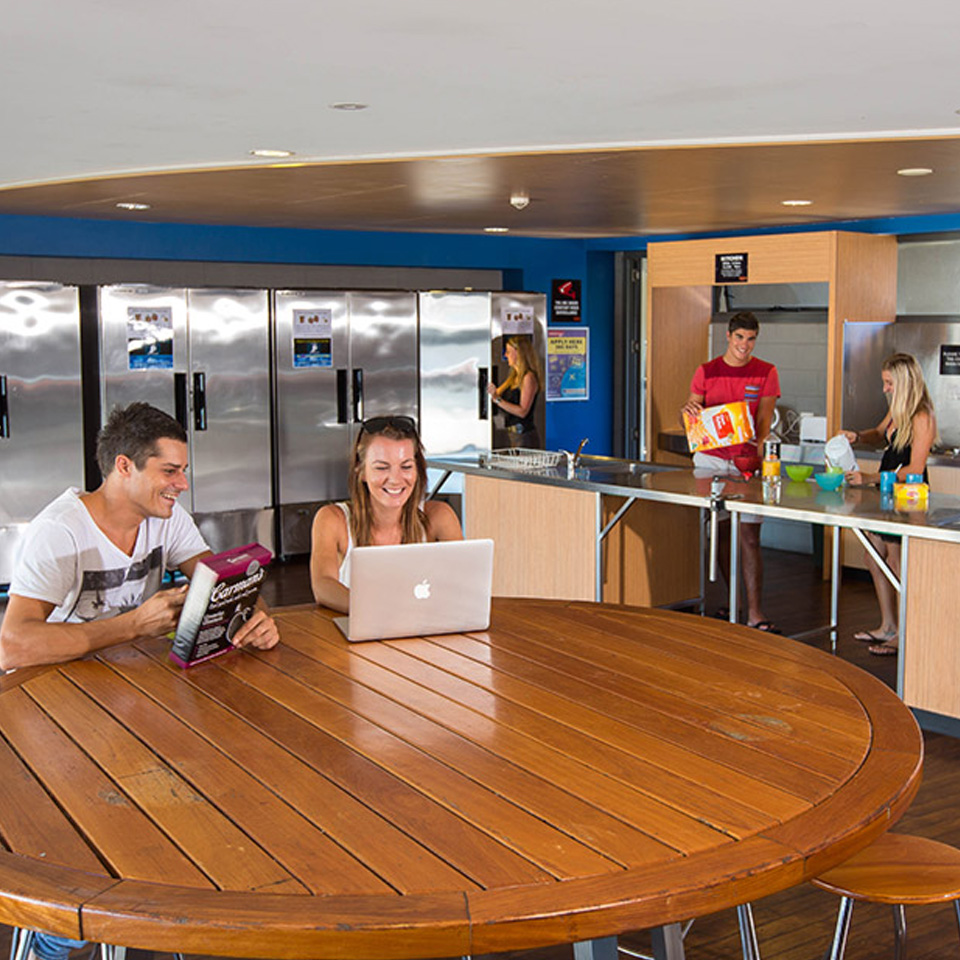 Food time in the Gilligans Kitchen 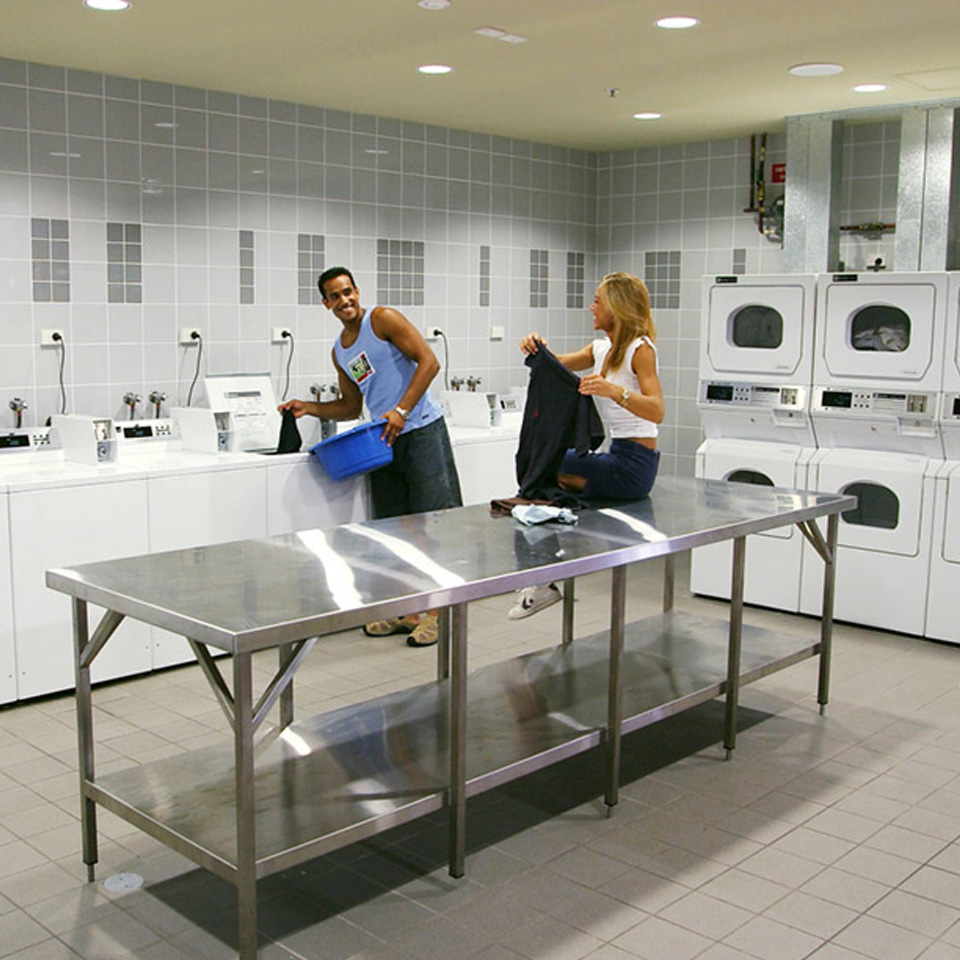 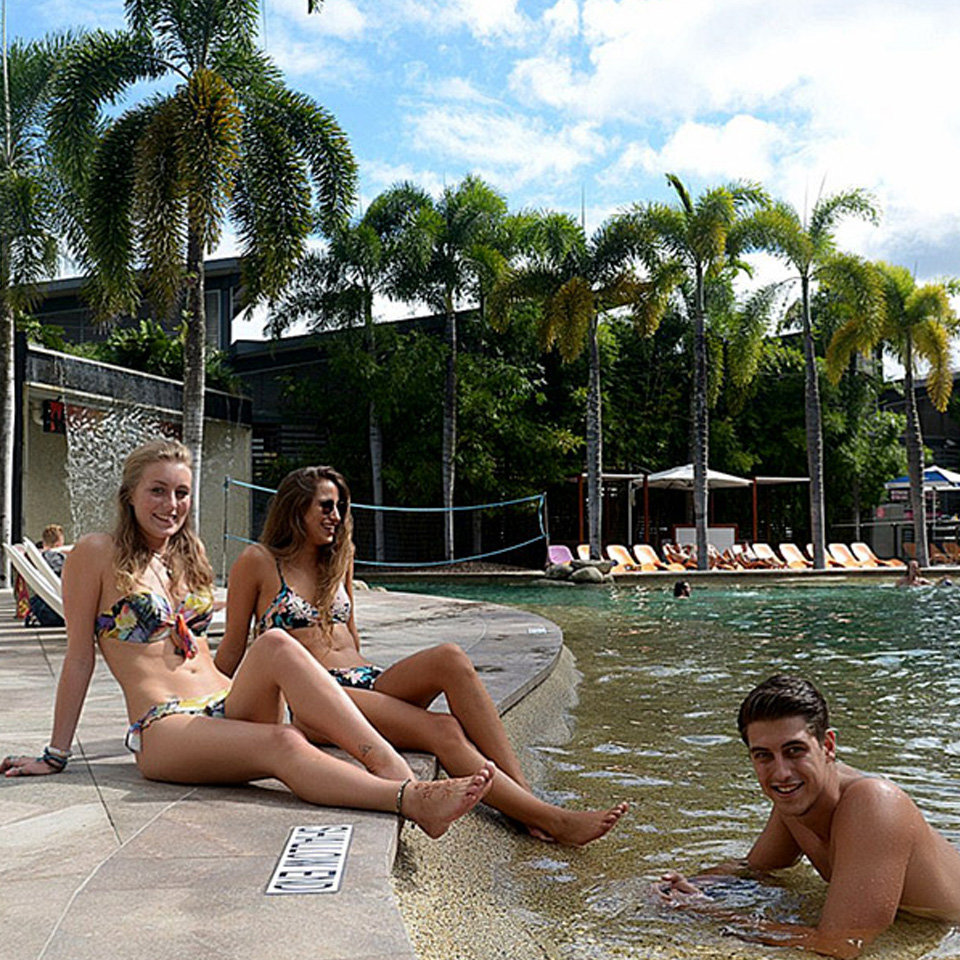 Chilling by the pool 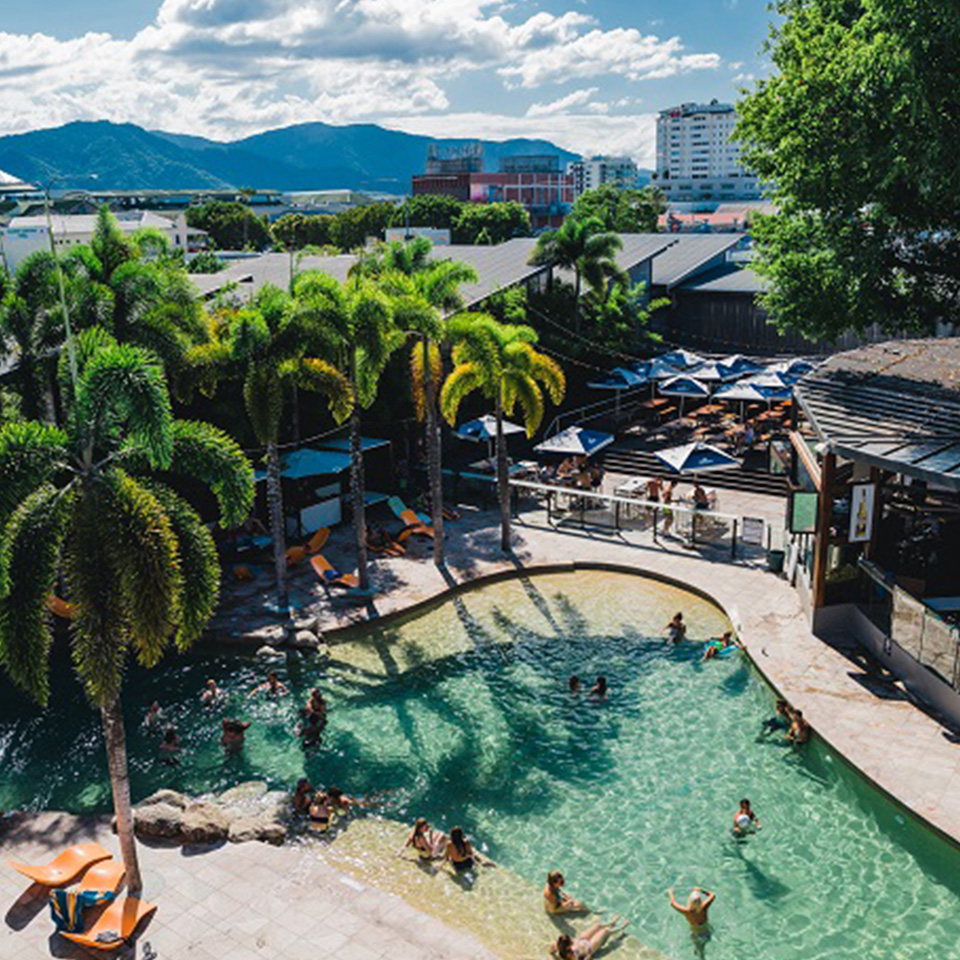 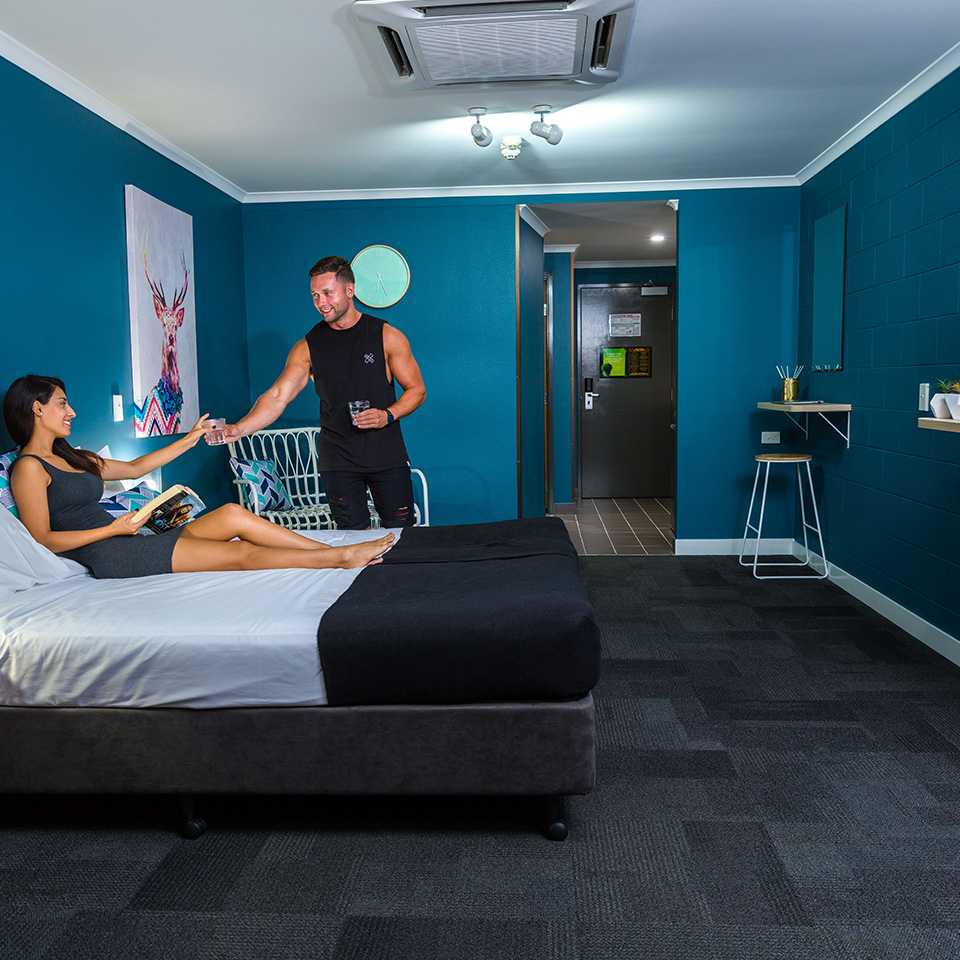 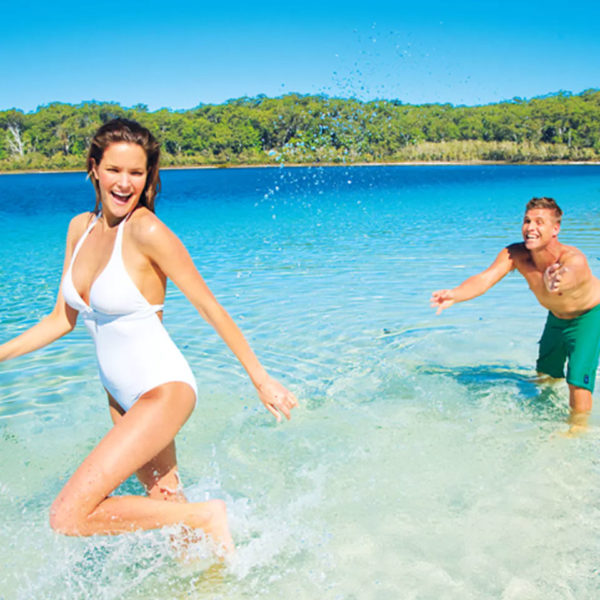 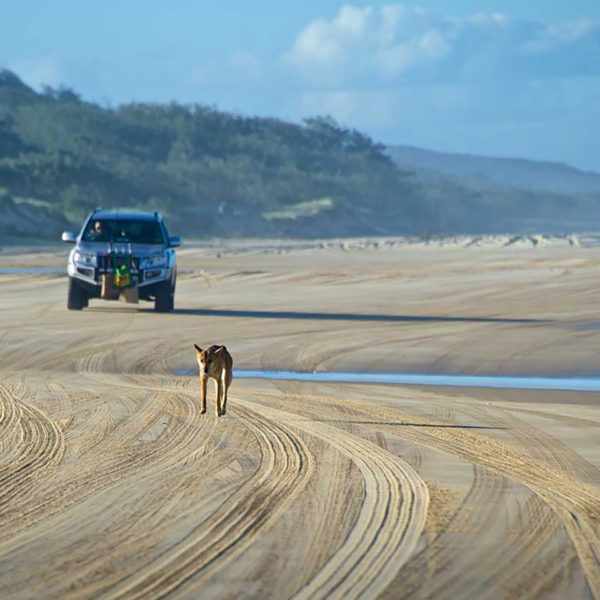 Make The Most Of Fraser Island 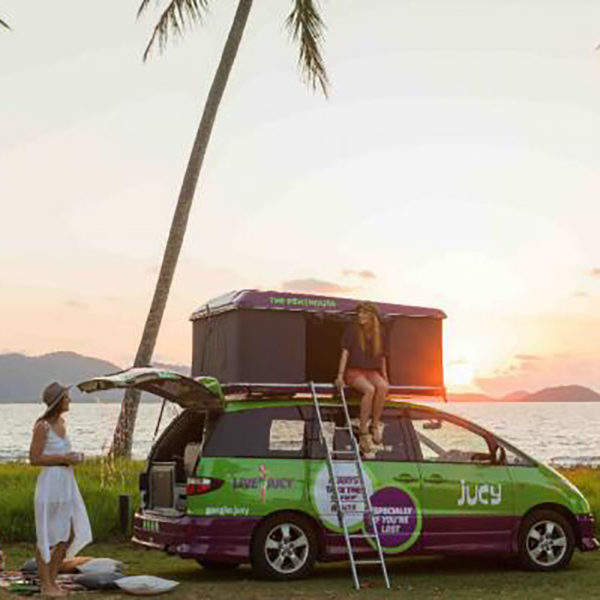 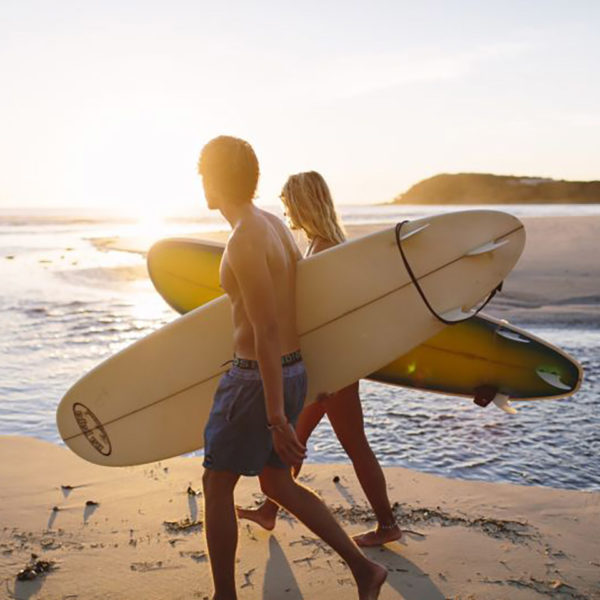