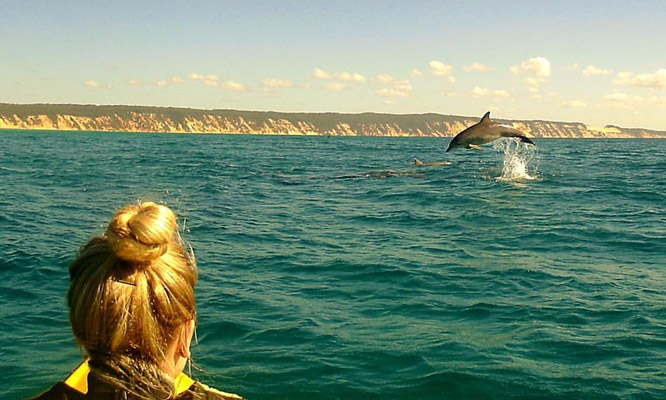 Hi Alice, what is the name of your tour activity, where are you located and what do you offer as a product?

Cape Byron Kayaks, we're a kayak with the dolphins and whales tour in Byron Bay.

What age demographic usually travels on your tours?

We take anybody from age five and up, but we have had two year olds out there and the oldest person I've had is a 96 year old. So it's definitely an adventure activity, but soft adventure suitable for all ages and abilities.

Do you offer a range of pick up and drop off locations?

We can pick up and drop off from hostels and other accommodation located within Byron Bay.

What is your average pick up and drop off time?

We always ask customers to check 24 hours beforehand by reconfirming with us via the phone number on your voucher phone 24 hours prior to departure.

Catch a couple waves, catch up with our local friendly wildlife, dolphins are here year round. 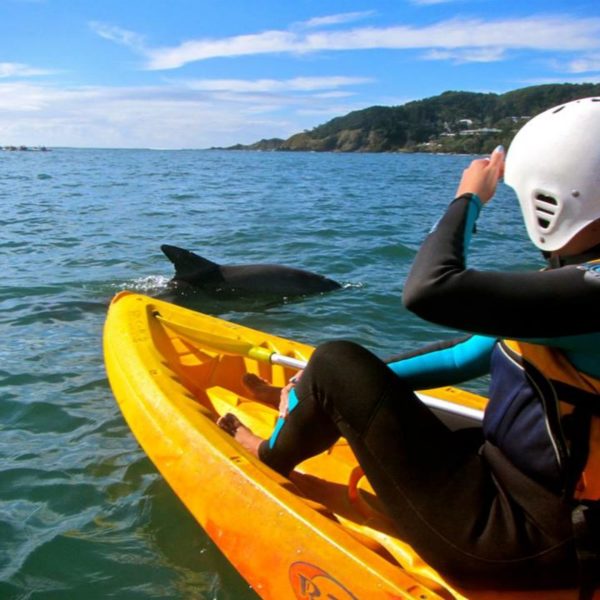 What are some tips to bring or have prepared before arriving on the tour?

All you need to bring with you is your swim wear, a towel for afterwards, sunscreen, a bottle of water, and a sense of adventure.

If it's a bit chilly do you guys provide a wet suit?

We certainly provide wet suits if needed. We provide life jackets, helmets, wet suits, all gear and equipment necessary at no extra charge.

What kind of training do your guides receive and how experienced are they?

What qualifications, certificates or awards has your company obtained?

What type of kayaks does your company offer?

The kayaks we use are very stable, double sit on top ones. Very safe, stable, easy to paddle.

How many people usually travel on your tour?

Maximum group size is 32, anything from 1 to 32 generally it is fairly busy.

Is food included or available to purchase on your tour?

We provide a light morning or afternoon tea free of charge; which is tea, coffee, milo and all the tim tams you can eat.

Can you run me through an itinerary of what the client will experience on the tour?

Once everyone's arrived and signed in we'll get their equipment organised, the guides will run through the safety talk and teach you how to paddle.

We leave from Clarkes Beach, which is right next door to Main Beach in Byron. We'll basically follow the coast line out to the cape, out to the most easterly point of Australia. We go around the Pass, which is a world famous surf break, out to Wategos beach, which is where we normally catch up to the dolphins.

Wategos beach is a national park and we stop here for morning or afternoon tea and teach you how to surf waves. We Catch a couple waves and catch up with our local friendly wildlife.

How fit do you need to be to participate?

Most people we take out have never kayaked before so it's very easy, very breezy.

Do you have a high or low season? If so, how far should people be booking in advance to secure a spot on the tour?

Summer is definitely busier, however winter is still very busy, especially during school holidays. So I'd be recommending you book sooner rather than later.

Do you have any safety systems or procedures in place for travellers?

The tour is fully guided, at all stages during the tour you will be with guides who are fully qualified Surf Life Savers and in first aid. All our customers wear life jackets and helmets and will be right in a kayak with plenty of guides. There's 1-8 guide to customer ratio.

So why should travellers choose your product over other products in the area?

We see dolphins on 90% of our tours. If you don't see a dolphin or a whale you get to come again for free. We have 1,500 resident dolphins that live here year round, so it's an awesome way to see wildlife in their natural habitat. It's a great way to experience Byron Bay and all the beauty, you get out to see Byron Bay and the cape and the light house from a different angle. Have fun, catch waves, get wet. 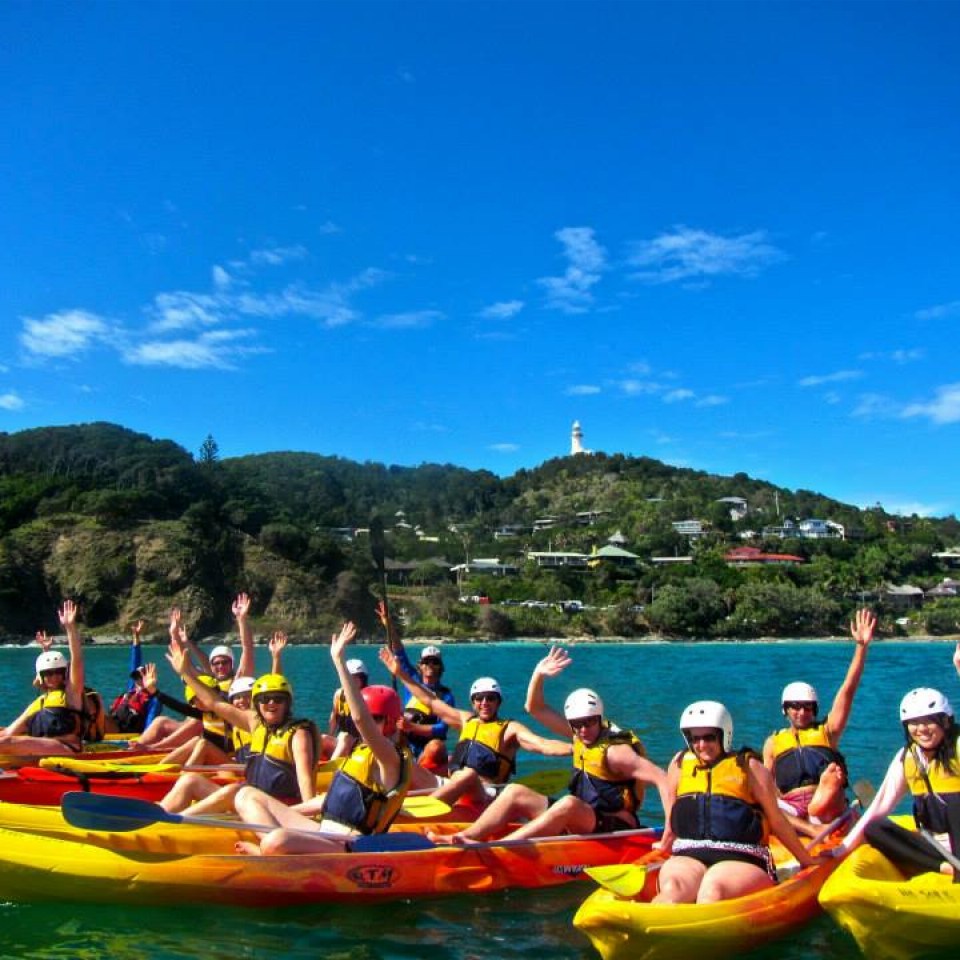 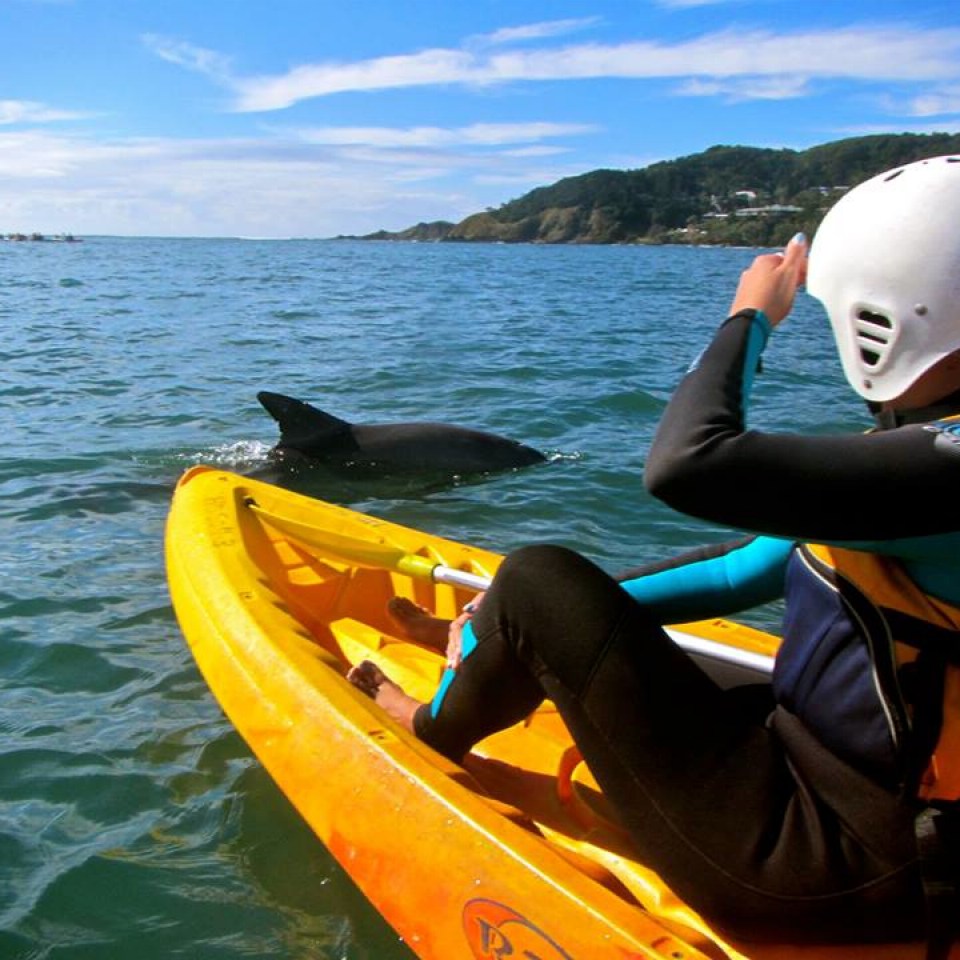