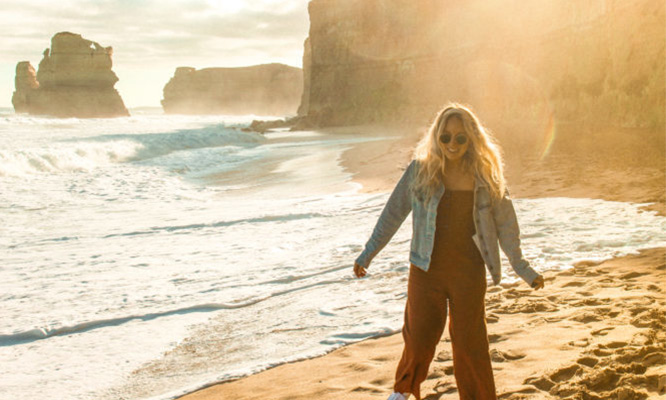 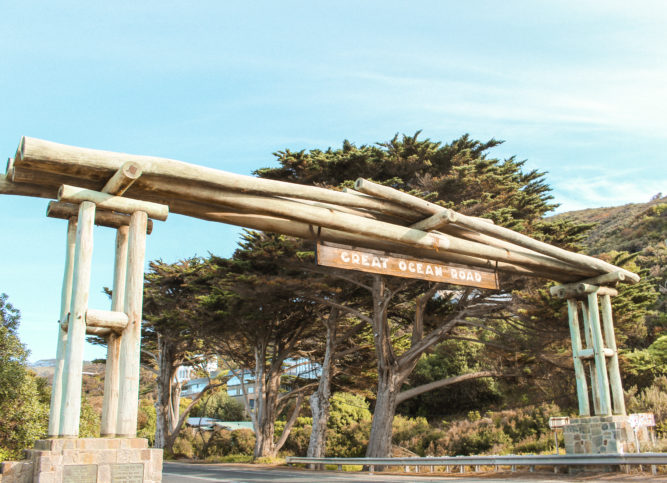 The best way to discover this scenic drive in Victoria is through a Great Ocean Road Bus Tour!

The Great Ocean Road stretches 244km along the coast of Australia, starting in Torquay and ending in Allansford.

With stunning views of the headlands, beaches, rainforests and cliff tops, there are an abundance of things to do along the way! While you can spend days exploring the Great Ocean Road and all that it has to offer, we don’t all have heaps of time on our hands to do so. Whether you’re a tourist or local, the best way to discover this scenic drive in Victoria is through a Great Ocean Road Bus Tour!

Day tours offer the best sights in a short amount of time. It’s clear that Great Ocean Road Bus Tours offer the most bang for your buck… but if you aren’t completely convinced yet, we’ve put together a snippet of some of the information you’ll receive and the best stops along the way!

Another purpose of the Great Ocean Road was to serve as a war memorial for the soldiers who had not survived the war. It currently stands as the largest continuing war memorial in the world. The Great Ocean Road Memorial Arch is found at Eastern View near the beginning the Road. It is a tribute to the servicemen from the war and has been built three times. The first one was removed for widening of the road and the second one was destroyed in the Ash Wednesday Fires.

The funny thing is that these well-known Limestone stacks have been fooling tourists for quite some time!

Is it really an ocean?

A common misconception of the Great Ocean Road is that the water you see when driving along the coast is the ocean. I mean it must be an ocean if the name is Great OCEAN Road, right? ….Wrong. It’s actually a sea strait called Bass Strait, which separates Tasmania from Australia’s mainland. Most of the road runs along this strait, eventually leading to the Indian Ocean after a few hours of driving. Another interesting fact about the Great Ocean Road is that it’s commonly known as the shipwreck coast. This is due to a believed 700 ships that were wrecked upon reaching the coast.

Lorne is not only a town in the Great Ocean Road, but a popular tourist destination during the summer months. Lorne is also home to a record holding pier. Each year there is an annual Pier to Pub swimming race where 4 000 contenders jump off the pier, swim along the beach and race to the pub in town for a beer. In 1988, it held the world record for the largest open water swim. The competitors each pay a fee and 100% of the proceeds go to the Lorne Surf Life Saving Club. If you’re planning your trip to the Great Ocean Road during the summer, be sure to save the date of the Pier to Pub competition and see it with your own two eyes!

The tale of Split Point Lighthouse

Split Point Lighthouse is a beautiful lighthouse that sits along the coast of the Great Ocean Road. While it’s a great place to visit simply for its aesthetic appeal, there is an interesting story behind it as well. Years ago the lighthouse keeper scratched a hole in the paint in the lighthouse and created a system where a light would flash and reflect through the hole. This told the lighthouse keeper that everything was fine when he was away from the lighthouse. It allowed him to work from other locations… like the pub! Talk about Australian Ingenuity!!

Are there even 12 Apostles?

One of the most famous spots along the Great Ocean Road is the Twelve Apostles. The funny thing is that these well-known Limestone stacks have been fooling tourists for quite some time! There were only ever 9 stacks to begin with and there are currently only 6 standing. Many also don’t know that their original name of the sight was the Sow and Pigs and it was later renamed by Tourism Australia as the Twelve Apostles.

You probably have heard that kangaroos are typically called joeys, but did you know that koalas are as well?! Kangaroos and koalas are actually quite similar as they are both marsupials (meaning their young are carried in their pouch). All marsupial babies are referred to as joeys, not just kangaroos! Koala joeys are known to be the size of a jellybean and are pink, hairless and blind until they are about 6 months old.

If you’re lucky you may even stumble upon some wild kangaroos or wallabies! 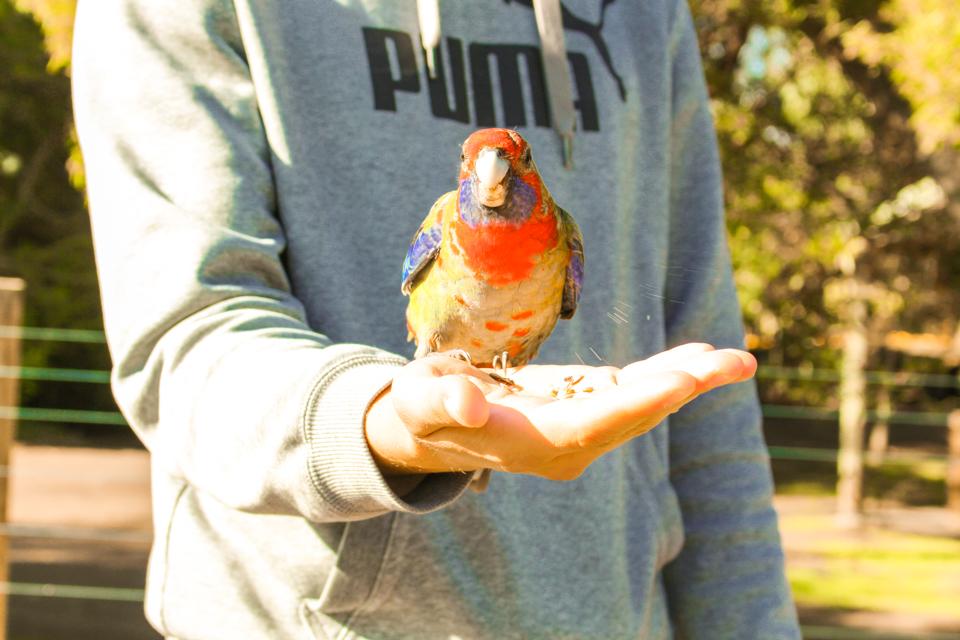 One of the best parts about exploring the Great Ocean Road are the many opportunities you have to engage with the Australian wildlife. If you’re looking to spot a Koala, the Kennett River Walk is your best bet! Just off the Great Ocean Road, many Koala’s are found hanging from the trees. Unfortunately koalas are only awake for approximately 4 hours a day, so you’ll most likely find them sleeping. When they are awake, you may find them eating one of three types of Eucalyptus leaves or moving to another tree to find fresh leaves.

Apart from Koalas, you’ll be sure to see many birds at the Kennett River Walk. Crimson Rosella and White Cockatoos are the most popular birds you’ll find. They love to approach people, but don’t be too worried! They’re just after some bird feed and are completely harmless.

If you’re lucky you may even stumble upon some wild kangaroos or wallabies! My Great Ocean Road bus tour encountered a beautiful wallaby right before leaving Gibson Steps. I could’ve sworn it was posing for us! 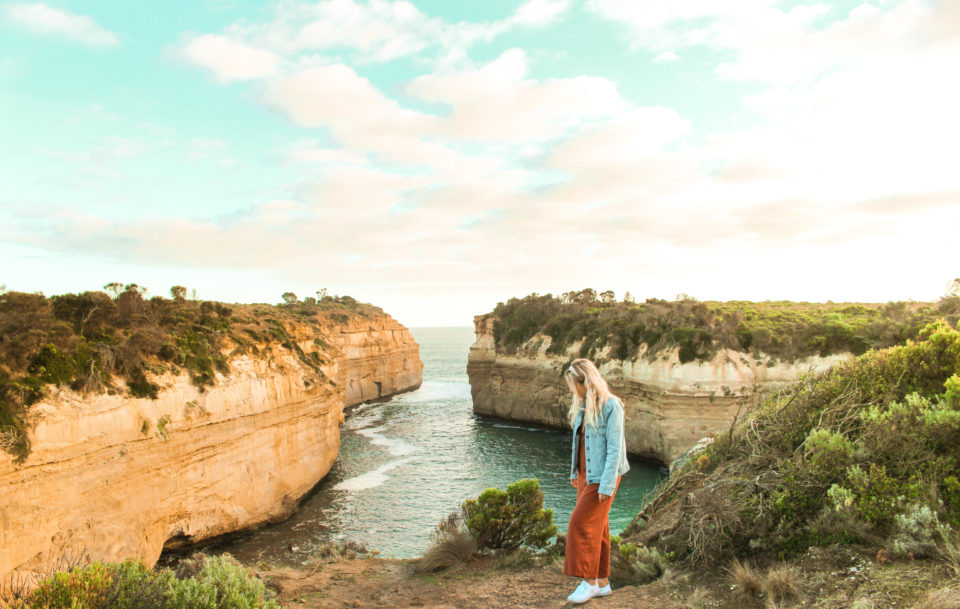 While there are many beautiful sights to see during a Great Ocean Road day tour, there are a few must see spots that stand out among the rest. If you only have a day for your trip, these stops are sure to be a priority!

The drive from Apollo Bay to Gibson Steps is through Cape Otway, which is surrounded by temperate rainforest. This rainforest is encompassed by Mountain Ash trees, which are the world’s tallest flowering plant. They typically reach heights of 100 meters and the largest one recorded was 140 meters. In this rainforest you may be able to see the Black Otway snails. They are one of four carnivorous land snails and are specific to this geographic region of Otway.

Loch Ard Gorge is another classic spot to visit during a Great Ocean Road bus trip. Alongside its natural beauty, is a unique story to go along with it. It’s named after a ship called Loch Ard that was sailing from London to Melbourne. The captain of the ship heard the crashing of waves, which meant it was getting too close to the coast. In his panic, he threw down the anchors, but was too late.

A young Irish woman named Eva Carmichael jumped overboard and held onto a piece of wood, since she couldn’t swim. Tom Pearce who was also aboard the Loch Ard was a strong swimmer and swan into the gorge. Luckily he was able to pull himself up onto the shore. He heard screaming coming from Eva and saved her, bringing her back to a cave in the gorge. Tom climbed out of the gorge – which is a feat in of itself – and began a long trek towards Melbourne. He was fortunate enough to find two farmers that rescued him and Eva. Eva returned home to Ireland after the traumatic incident. They were the only two survivors of the shipwreck.

While the story is quite frightening, the sights are fantastic. Definitely a lookout you don’t want to miss during your time at the Great Ocean Road!

It’s safe to say that the Twelve Apostles are probably the most well known points of interest along the Great Ocean Road. The best time to visit is during sunset, where you get to experience a breathtaking panoramic view of the 6 apostles 😉 It makes for some spectacular photo opportunities. You really can’t put into words how beautiful it is until you see it for yourself!

Planning a Great Ocean Road tour isn’t as easy as you may think. As someone who has been in the middle of planning a tour with a group of people in the past, I can definitely say that a Great Ocean Road day tour is the way to go! With plenty of information at your fingertips, easy access to the most beautiful views and no worry of transportation, you’re sure to have an amazing day.

Join us for the trip of a lifetime and explore all of the beauty and adventure that the Great Ocean Road has to offer!