Travelling with your friends can and should be an awesome time that creates forever lasting memories for all parties involved.

A lot of the time it can be a once in a lifetime opportunity before we get older and get responsibilities and all that lame sort of stuff so It’s definitely preferential for it to be one of your best memories instead of a destroyer of friendships which is a real possibility .

Below are a few pointers for people to keep in mind when going travelling with other people which everyone should keep in mind to keep it all smooth sailing.

1. Have enough money saved up!

Make sure you have enough money to pay your own way, there is nothing worse than getting hassled by your travel mates for money with an empty promise of paying you back when they get a job, or on the other hand to rely on other people for your next move and feeling the guilt of owing someone money.

When planning a major trip where you will be travelling for a long period of time in one or numerous countries it is important to research and budget for where you are going and give yourself a realistic daily budget factoring costs like the following:

If you are a party animal back home, chances are you are going to want to party overseas and that can be quite expensive when eating and drinking out at bars and restaurants in Australia. Be prepared and save that cash so you can support your awesome partying ways!

It is always cheaper to eat and drink at home, hostel or the beach or park rather than going out to bars, restaurants or clubs. In saying that, the atmosphere may not be the same but your wallet will thank you.

If your more of a chilled out traveller, there are plenty of chilled out parks, activities and hostels in Australia that you and you new found travel mates can frequent and socialise at.

A tip to save money would be to organise a big feed from the supermarket between friends before hitting the town.  You can easily feed a group of four people for around $10 at an Australian Supermarket. In saying that, it wont be the most glamourous meal, most hostels may offer things like Free Pasta or Rice, and then all you need to do is add in the sauce, Vegetables and some meat if you wish.

On the other hand, ask the locals where good to eat for cheap, most hostels will have relationships with local businesses for food and drink deals.  Have a look at our One Stop Guides for tips on where to find those sort after cheap eats and drinking holes in each destination.

This is a huge factor that can cut people’s journey short quickly if they are not watching their budget.  Too many times over my years in hostels have I seen travellers although having a great time not watching their money closely enough. Before they know it they are calling Mummy and Daddy begging for money or being that annoying person who has no money and is mooching off fellow travellers.

In saying that to break in down, below is a cool infographic of the rough cost of alcoholic drinks in Australia. 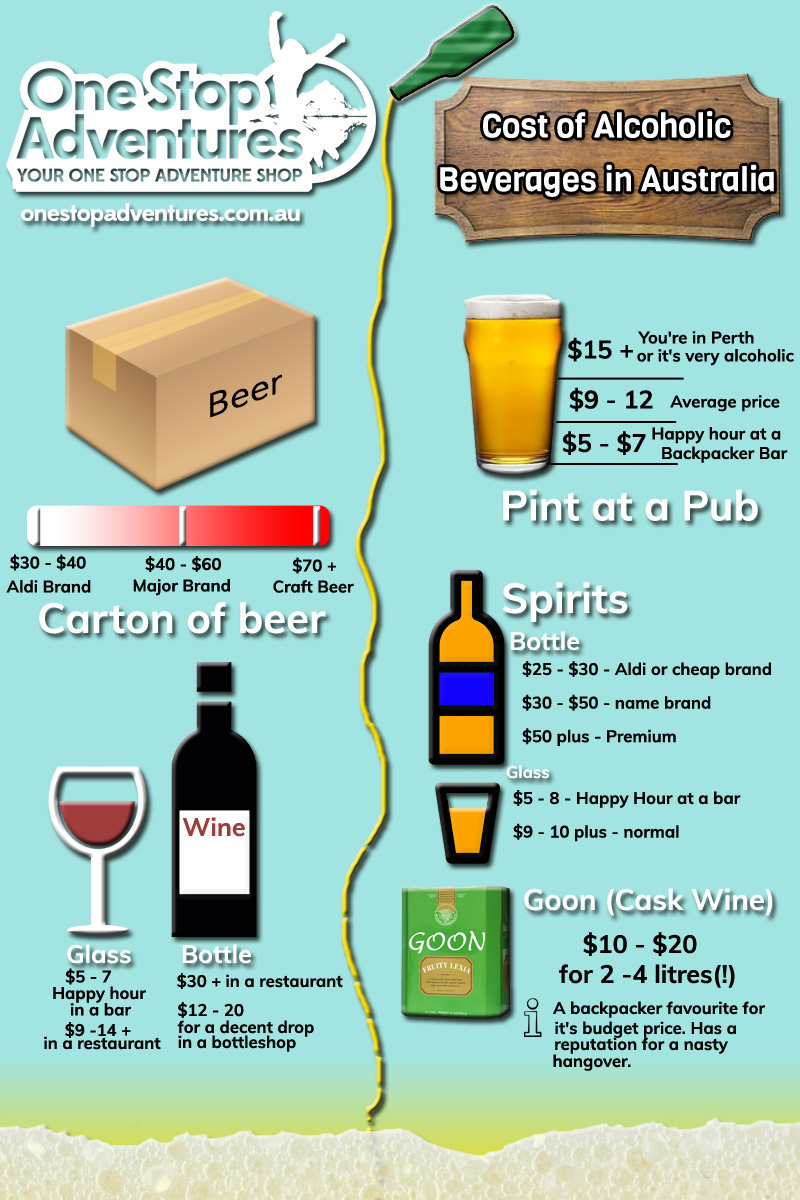 Travelling in close proximity to your best mate or partner can test even the strongest of relationships so it is best to set out a plan, rules or at least an understanding of what each other or the group wants or requires out of the trip.

This can come down to what type of accommodation each person is expecting, places expected to visit, time spent at each location, travel plans in general,  where to buy a bus pass, hire a car or campervan, financial cost sharing and end of night plans (knowing what to do if you decide to stay out and your mate wants to go home or vice versa. Make sure they get home safe before continuing on with your night, or just knowing when to call it a night as a team). That way you can rest assured your mate, partner or relationship will stay in tact.

If you do this there will be less arguments on trivial little things which you shouldn’t be worrying about, travelling is full of surprises and the most rewarding part of travelling is overcoming these challenges, seeing new places, having new experiences and making new friends.

If you are staying in hostels you must be respectful of the others staying in the same room. Most dorms in Australia start with at least 4 people per dorm and go up to 10 bed dorms. When arriving home late it’s important to remember people in your room may have to get up early the next day for work.  On the other hand, if you have to get up early for work be respectful that your fellow room mates may have had a massive night and need their beauty sleep when you wake up earlier than them. Personal hygiene is paramount though I will talk about later in this article.

This is very important aspect of having respect for your fellow travellers, unfortunately you will always get one person in a hostel or share house who is going to try and take advantage of a bottle of milk or left over lasagne in the fridge.

The best thing to combat these evil minds are to get a cool bag with a zip lock which you can lock with a small padlock. That way those five finger discounters wont be able to gain access to your much treasured food and beverages.  It is also important to keep a label and date your food which most hostels will supply. Make sure if staying somewhere long term that the your label details are up to date as you don’t want hostel staff throwing your food out. Following these instructions will be your best bet of keeping your food and drink safe. 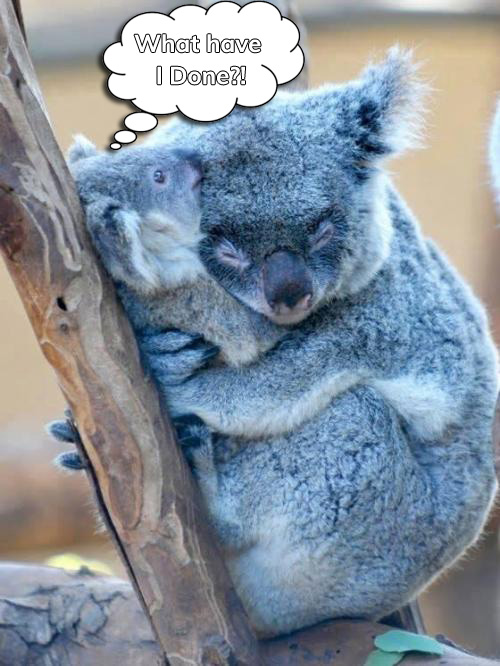 If you are travelling with a friend or acquaintance you’ve recently met, it’s important to realise that just because you are travelling in a different country than your own it does not mean you are going to be best friends for the whole time.

I am not trying to sound like a Negative Nancy, I am just going on the 10 years I have experienced in hostels and observing travellers and their companions, the fact of the matter is people can meet other people and plans and people can change, I’m not saying all people, just some. A bit of food for thought really.

You may not have been out on a night out with that person (they could be an Angel or Saint during the day and then turn into the Devil after a few Jaeger bombs).

Another good reason to spend a lot of time before committing with a prospective travel companion is observing the level of personal hygiene undertaken by your travel mate.  For example, if they don’t find it important to wash their clothes, brush their teeth or wearing deodorant. You may end up regretting committing to a 60 day trip up the east coast sleeping next to them in a campervan or sitting next to them on those long Greyhound or Premier Bus pass rides. Your nose will definitely regret it.

This can work both ways for both parties, if you have not committed to each other too much then an amicable split won’t be the end of the world as you wouldn’t have made unbreakable plans and still be able to salvage what is left of your friendship and go along your merry little ways.

Instead of being “THAT Guy or THAT girl” be the nice guy or girl, offer to help the tour guide or bus driver when possible. Remember your tour guide has been up hours before you and will go to bed hours after you in preparation for your days activities.

Most small adventure group tours require everyone to chip in and offer a hand when cooking and preparing meals, washing and drying dishes, or unloading the bus at the end of the day, or collecting firewood and setting up a campfire.

As the saying goes, many hands make light work, if everybody chips in then there is more time for everyone to enjoy themselves and get to know each other and more time to spend at different locations on tour.

Offer to help wherever possible.

5. Be prepared, reliable and relaxed!

This particular point can be applied in a number of ways. It's important to be prepared for your trip, research where you  are going and know as many ins and outs of your destination as you can. Don't just leave it up to your travel partner(s) as you may pick up on something they missed which could be invaluable information. E.G Your friend may know the bus departure time but they may not have read the fact that you need to be at the bus station 30 minutes early for check in.

It's also important to make sure you have everything with you that you need, double check you have the correct tickets and all other essential travel items. No one wants to be the person half way to the airport realising they forgot their passport.

Finally it's important to relax. As prepared as you are and as reliable as you are being things are bound to go astray or go wrong and you may have to deviate from your plan. Alot of the time this is due to the weather, but the important thing to remember is not to panic! It's not the end of the world and there's no point bringing yourself and other people down by getting upset. It's all part of the journey. 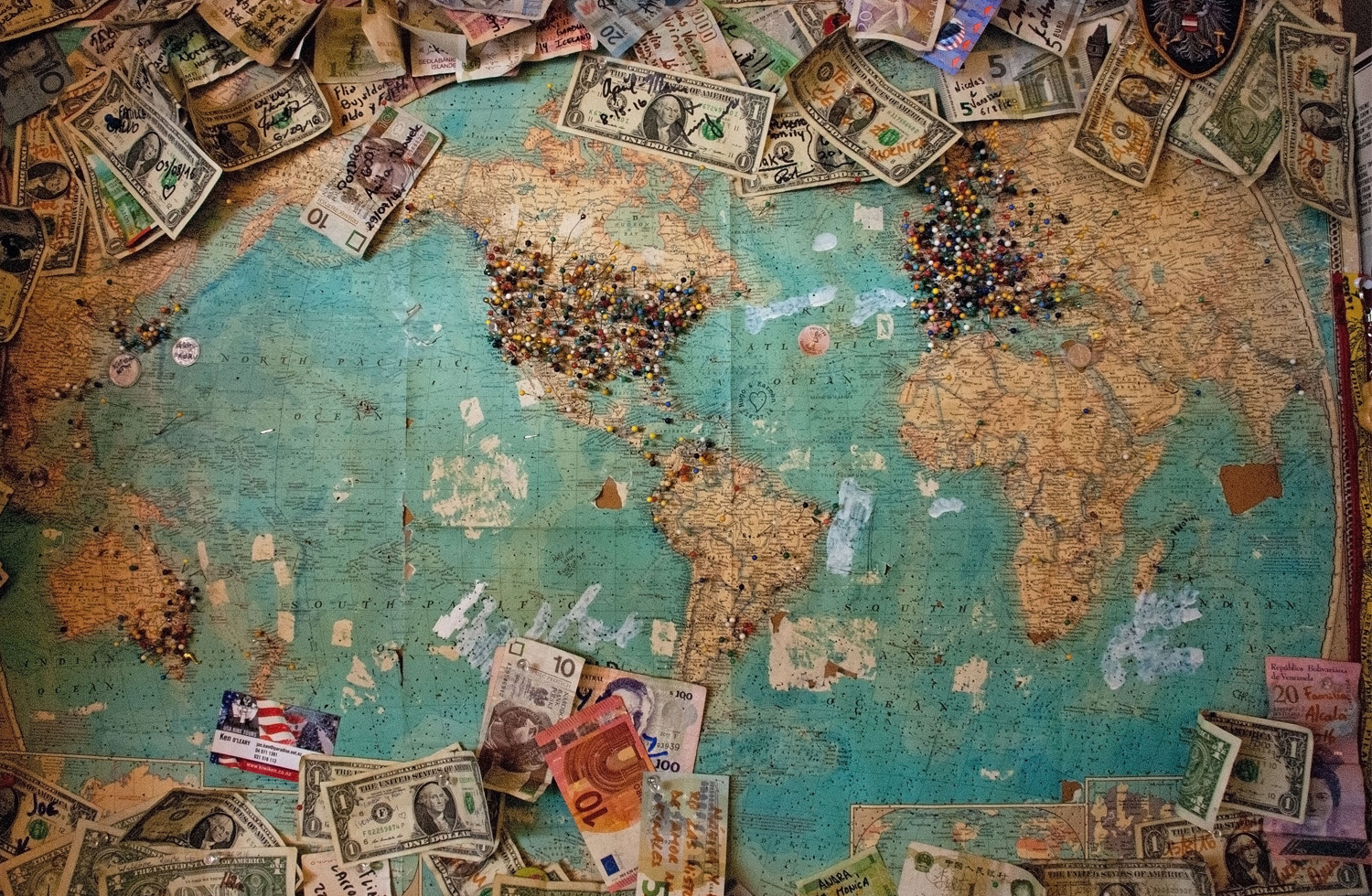 Have enough money saved up! 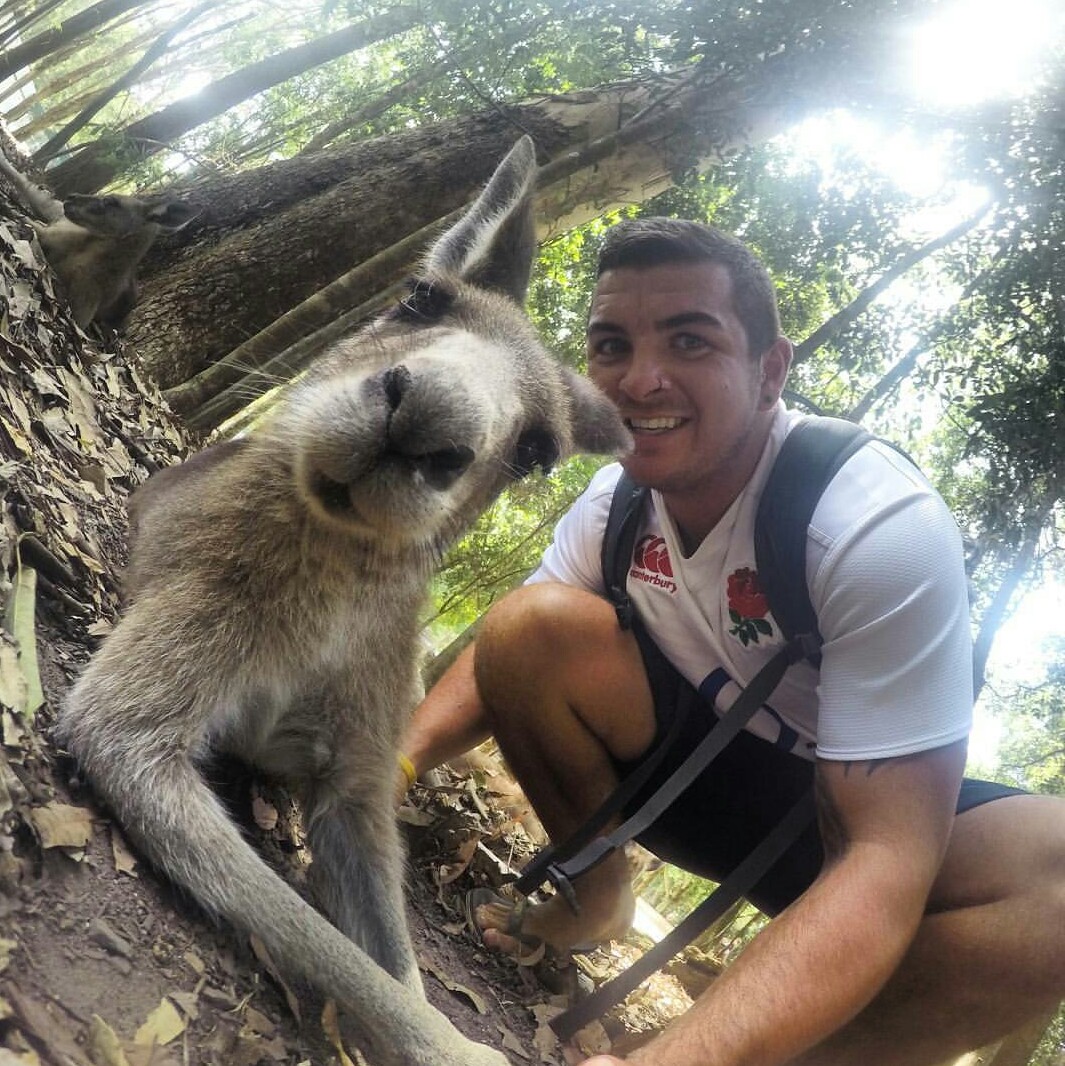 Be Helpful - Like this guy helping Lidia out of a jar of vegemite. 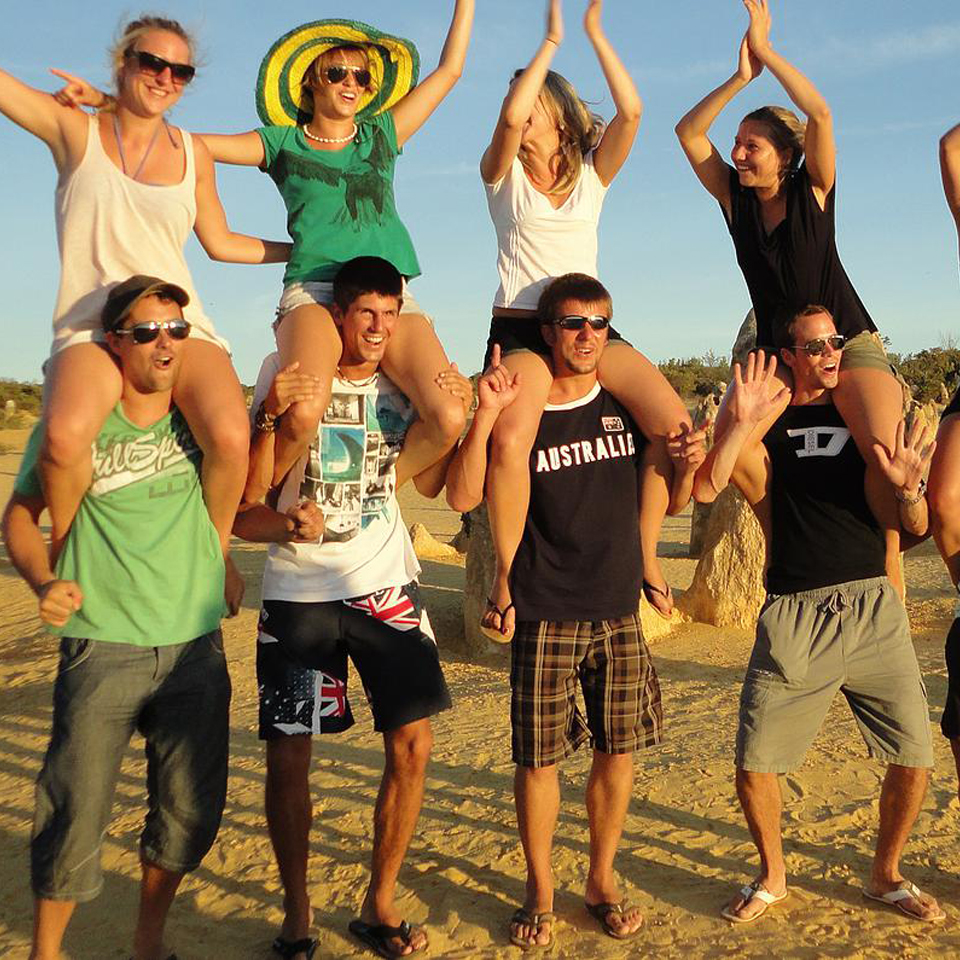 Be Prepared, reliable and relaxed.
×
Travel Information Regarding Covid-19Read More